One Night In Karazhan Reveal Liveblog 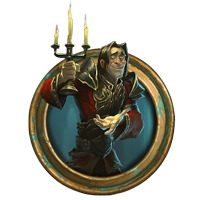 Greetings to you, future partygoer! You’re invited to attend the shindig of the millennium at Azeroth’s most terrific tower—Karazhan! As Medivh’s guest, you’ll experience everything his delightful domicile has to offer while rubbing shoulders with Azeroth’s most fascinating beings and dancing the night away in Hearthstone’s next Adventure: One Night in Karazhan!

It’s Raining Mana
The magus Medivh has put his considerable mystic talents to work transforming Karazhan into the ultimate celebration destination, so prepare yourself for an unforgettable night! First you’ll meet the staff, including his ever-capable majordomo, Moroes, and then it’s off to an enchanted evening filled with music and dancing, unforgettable performances, and so much more. When you’re not burning up the dance floor, you can take a break to enjoy amenities beyond imagination, including sumptuous feasts in the dining hall and a visit to Karazhan’s magnificent menagerie.

We’re So Excited
The biggest party of the year kicks off with a free prologue mission that is sure to put you in the mood to groove. No guest of Medivh’s will leave Karazhan empty-handed—you’ll receive two copies each of Enchanted Raven and Firelands Portal just for checking out the prologue! 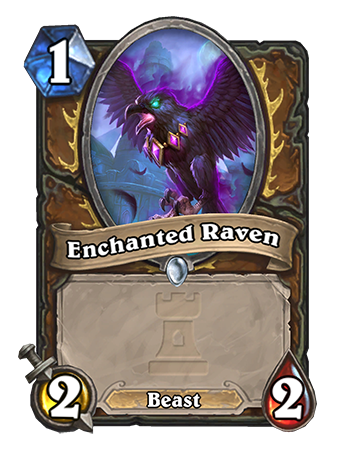 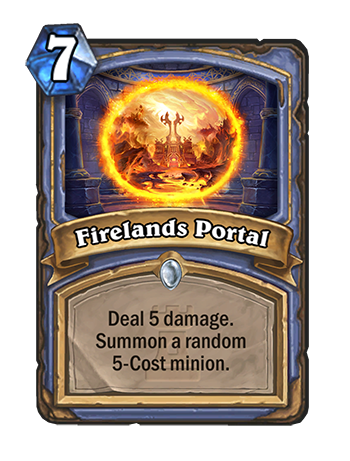 Of course, attending the party proper will be more than worth your while, as you’ll take home 43 more sparkling new Hearthstone cards as party favors to commemorate the event.

Ain’t No Stoppin’ You
A soiree of this stature will feature the finest luminaries of Azeroth and beyond, and a coterie of that caliber wouldn’t be caught dead walking to a party. While Kel’Thuzad might be taking the soul train, everyone else will be traveling first class! Karazhan features precisely calibrated portals attuned to a variety of exotic locales to accommodate guests with specific teleportational needs. With the power of portals at your fingertips, every travel experience is a great success!

Take Me to Funkytower
No visit to Karazhan would be complete without a revitalizing soak in the hot mana pool. After energizing your body and mind, take a stroll through your host’s moonlit library and peruse his magical tomes. Then try your hand at mixology in the well-stocked alchemist’s laboratory, or perhaps take in a show at the private opera house. As Medivh’s cherished guest, the tower is yours to explore. 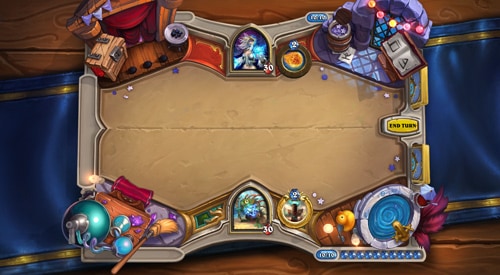 Don’t Stop Til You Get Enough
Mark your calendar, equip your finest wizarding robe, and be sure to visit the official One Night in Karazhan site to learn everything you’ll need to know to show up to this party in style. 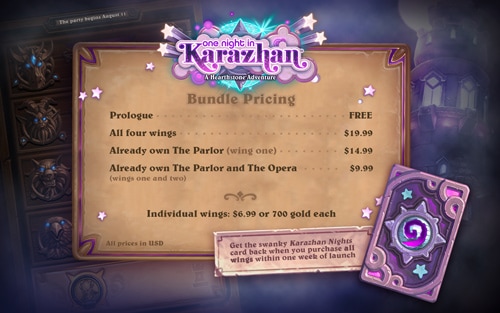 Save the date! We’ll be gathering to celebrate good times starting August 11. Until then, we bid you golden wishes and mana crystal dreams!

11:00 Talking about ChinaJoy itself.
11:02 Goovy music was playing, Yong Woo tweet mentions "groovy."
11:03 Outside of stream, One Night in Karazhan confirmed!
11:07 Interviews with Chinese players.
11:09 Brode takes the stage!
11:10 "You've been invited to the greatest party Azeroth has ever seen," Brode says.
11:13 Takes place before Karazhan was abandoned, when Medivh was a bachelor.
11:15 The chess event is in the adventure!
11:16 Ivory Knight revealed!
11:17 The plays are also here!
11:20 Hunter card and the first legendary revealed!
11:22 Check out The Curator, talk about card draw!
11:23 You actually climb from the bottom of the tower to the top, reverse from usual adventures.
11:23 Everyone gets a free prologue and two cards.
11:25 45 new cards! Weekly wing releases starting in two weeks!
11:27 End stream! Now updating the post, hang tight!

10:28 There will be a 15 minute pre-show starting at 10:45 PM PST.
10:32 The stream is now live and the tavern music is playing. We're getting close!
10:35 Don't panic! Stream is back down as the crew fights some technical issues.
10:37 And we're back for real this time, complete with a countdown! It says 20 minutes despite Frodan's claim that there would be a pre-show.
10:40 Pre-show is live!
10:42 Frodan and Azmoqt will be going over where Hearthstone currently stands. Discussing the Old Gods, League of Explorers, and more.
10:44 Consensus is that Priest and Paladins need some love in Standard.
10:47 They're saying Rogues could use more diversity, Mage seems to lack hard control archetypes.
10:48 Blizzard will be revealing cards and announcing dates.
10:50 Frodan says he thinks we'll all be surprised despite all of our investigations into teasers.
10:57 Pre-show ends. Videos will fill up the final five minutes.

Here's the stage we'll be seeing!